Move Beyond Platforms With Xsolla Launcher And Login 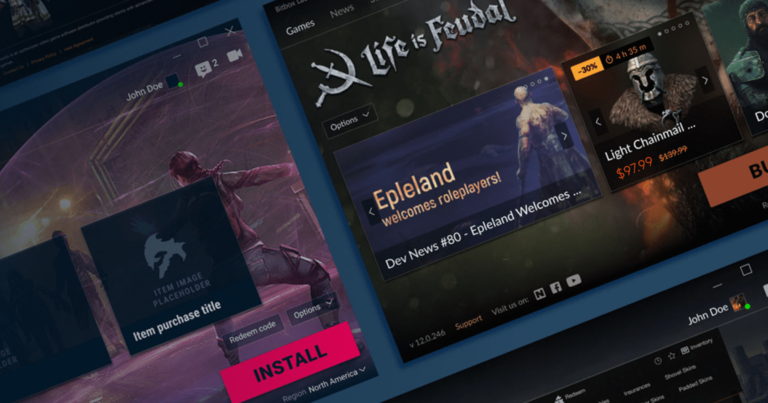 Many developers and publishers assume that to be successful on PC, they need to release their game on an existing platform. There are plenty of storefronts out there, each boasting their successful features, as well as things they need to improve. But developers don’t need to be bound to existing services when they have the option to launch a project via their own branded launcher. Plenty of companies do this already, such as Activision Blizzard, CD Projekt Red, and Epic Games.

These are huge companies with massive amounts of cash and intellectual property, and as a smaller studio without similar resources, building your launcher can sound like a monumental task. However, it is possible, and we’ve broken down what you need to know about getting started.

Why You Should Consider Distributing Your Game Yourself

There are numerous reasons for deciding to do it alone. For one, you won’t be paying a platform fee to whichever service you are selling your game on. This fee can be anywhere from 12–30% of your game’s cost, depending on the storefront. If your game makes $500,000 in revenue on a storefront that takes a 30% platform fee, you’ll only walk away with $350,000. You’ll need to pay taxes on that sum, too, meaning you could have relatively little to show for your hard work.

Game development is tricky and competitive, and studios should be looking to make any profits they possibly can to stay in business. These profits represent income that could be spent on developing more games, buying better equipment, hiring new talent, and so on.

Launching on your own service also means you have more of a direct relationship with your audience. If your players are buying your game from an existing storefront, then it could be difficult to have a close connection to your community. They might be visiting the store pages and buying your games, but you do not have a direct relationship with them. Selling directly to players also means that you can talk directly to them and establish a more personal connection.

There are other benefits, such as having access to your players’ email addresses, which will come in handy in the future if you decide to distribute or utilize another marketing tool. That way, you have more people you can reach out to about future releases, new content, events, and so on.

You aren’t reliant on someone else’s services. The big, existing storefronts are hugely successful ventures, but they might not have the exact kind of functionality you need. For example, they might not support the currency or payment system for a particular part of the world where your game is popular, or the service might not allow some of the functionality you have introduced in your product. Existing platforms also have content standards and policies, which might clash with what you want to do in your game.

Big stores can kick games off their platform for several reasons if they deem it necessary. In the past, storefronts have booted titles from their service for featuring adult content or extreme violence. They can even do this without warning, and while you’re sitting there trying to figure out what happened, you’ll be losing money because your game isn’t up for sale. Your title also might not be suitable for the platform to begin with, meaning you won’t be allowed on the store in the first place.

What To Keep in Mind About Self-Distribution

Before rushing to make your own launcher, consider this:

Building a launcher on your own is a huge undertaking. For one, while you won’t have any competition on your own platform, you also likely won’t have an audience of hundreds of millions of avid gamers, unlike Steam or Epic. You also won’t pay a portion of your cash in the form of a platform fee, but again, you won’t benefit from anyone else’s hard work on your own service, nor will you be exposed to potentially millions of consumers around the world. As a result, you could stand to make more money sticking with an existing platform.

You’ll probably need to spend more money on advertising to draw attention to your launcher and game to make up for not being on a hugely popular platform. If you’ve decided to do it alone, nobody will find you on the front page of Steam or Epic’s search results. You’ll have to fight for any attention you can get and – more importantly – invest in marketing and PR.

Sure, you’re saving money in one sense, but on the other hand, you’ll need to shell out vast amounts of cash to support the creation and general day-to-day management of your launcher. According to our research, on average, companies need to employ eight staff members, including five engineers. Each staff member has a monthly burn rate of over $8,300, and a launcher can take up to two years to create. Just to make your own service, you’re likely going to be spending close to $1.59 million.

That’s not exactly pocket change now, is it? If that figure is making you cringe, then you might not want to know that the cost of maintaining your launcher is around $20,000, each and every month. That means you could be spending up to $240,000 per year just to support your platform.

As mentioned earlier, you’ll be saving money by not giving up a slice of your profits to a third-party in the form of a platform fee, but you’ll also be spending around $1.59 million out of pocket before the tech is even ready to be released. In your first five years, you’ll have spent an estimated $2.79 million on the launcher.

Why You Should Be Cross-Platform

Game distribution isn’t all or nothing on one platform. You can have your launcher and still be selling your game on platforms like Steam. Some companies, such as Rockstar, bundle the launcher for titles — like Grand Theft Auto V — with the download that players buy from a storefront. In this instance, players have to link their Rockstar account to that of the platform they just purchased the game from, and there are several benefits to doing this:

But as we mentioned already, having your own launcher and platform can require a considerable level of investment, both in building and maintaining the tech side of things, as well as marketing expenses.

While the cost of making and managing a launcher can run up to several million dollars within the first few years, there is an easier way to have all the benefits of your own platform without the downsides.

Xsolla Launcher and Login are fully customizable tools that allow developers to centralize their work across multiple platforms into one service. While making your own launcher can take up to two years, with Xsolla Launcher, it can be ready in just 2–4 weeks.

There’s also the bonus of your platform having no upfront cost and not having to pay to maintain the technology and platform over time. The UI is localized in over 20 different languages, meaning that it can be used in many regions worldwide. If that wasn’t enough, Xsolla Login works with over 30 authorization providers, and it takes just half an hour to set up Login and Launcher.

Xsolla Launcher can be tweaked to your exact specifications and aesthetics. You can customize the software for your game or catalog and even hide the Xsolla branding so that your IP is front and center. You are also not restricted by any store-specific guidelines about how you choose to represent your game to your audience. With Xsolla Launcher, you can do it the way you want.

The platform is also easy to embed in any digital distribution platform, whether on console, PC, or even mobile. You can even use it to promote pre-orders for upcoming games, as well as founders packs and other in-game items directly to your users.

Xsolla Launcher comes integrated with useful third-party services like Mailchimp, making it easy to reach out to your consumers with marketing campaigns. You’ll be able to have a direct relationship with your audience, allowing you to manage your community across different ecosystems effectively.

With Xsolla launcher, you can access user data across different platforms, allowing you to see who is buying your content. You’ll also be able to cross-promote your games, driving sales of your other titles to your consumers. It’s also possible to create platform-independent strategies, making it easy to manage your games on different services.

Using Xsolla Launcher, you’ll be able to operate across different ecosystems, effectively creating a private publishing label. You’ll be able to engage with your players from various platforms in one place. As a result, you’ll be in control of your destiny.

With Xsolla Launcher and Login, you can also use Epic Online Services (EOS). This is a cross-platform offering that makes it easier and quicker for studios to launch, operate, and scale their games successfully. You can find out more in our guide on EOS here.

Developers and publishers aren’t the only ones who can benefit from the Xsolla Launcher and Login package. There are many advantages for players, too.

For one, they can use cloud saves to sync their progress and preferences within games and across multiple devices, and achievements can be retained no matter where they decide to play.

Players can tie their accounts on other platforms to Xsolla Launcher as well, along with email clients and social media accounts. The customizable dashboard can also keep users up-to-date on what is happening within your games and around your development efforts. You can let them know about upcoming updates and patches and promote forthcoming sales, DLC, events, and more.

Xsolla Launcher’s UI is localized into over 20 languages, meaning that players will be able to engage with your platform in their native tongue. That goes a long way towards gaining favor with consumers in non-English speaking parts of the world.

The games market is continuing to boom and has more platforms to release your games on than ever. This comes with many benefits — such as numerous revenue sources and a wider audience — but also means that managing your projects across so many services can be quite challenging.

Xsolla Launcher and Login will centralize your business, making it easier to make your game a success on the many platforms out there, even your own.